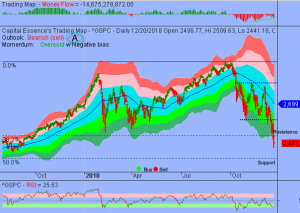 Stocks tumbled on Thursday as ongoing concerns over trade, politics, and economic growth added to worries over a Fed policy mistake.  For the day, the S&P dropped 1.6 percent, the Dow Jones Industrial Average lost 2 percent and the tech-heavy Nasdaq Composite lost 1.6 percent.  The CBOE Volatility Index (VIX), widely considered the best gauge of fear in the market, surged nearly 11 to 28.38.

Cyclical sectors sold off sharply Thursday amid concerns about a slowdown in global economic growth.  The Consumer Discretionary Select Sector SPDR ETF (XLY) tumbled 2.24 percent on the day and is down nearly 2.4 percent YTD, outperformed the S&P by a wide margin.  Now the question is whether recent selloff is a pause that refreshes or it’s a beginning of something worse?  Below is an update look at a trade in XLY. 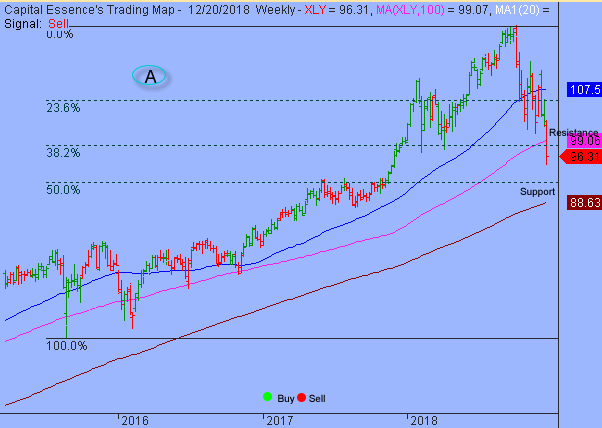 Our “U.S. Market Trading Map” painted XLY bars in red (sell) – see area ‘A’ in the chart.  The first dominant feature on the chart is the rising trend line starting in late 2015.  The second dominant feature of the chart is the downward trend since early October 2018.  This week’s massive selloff pushed the ETF below the 38.2 % Fibonacci retracement and the 2-year moving average, an important hurdle based on moving averages. This is a bearish development, opened the flood gate toward the 89-86 zone, or the 4-year moving average and the 50% Fibonacci retracement.

XLY has resistance just above 99.  Short-term traders could use that level as the logical level to measure risk against. 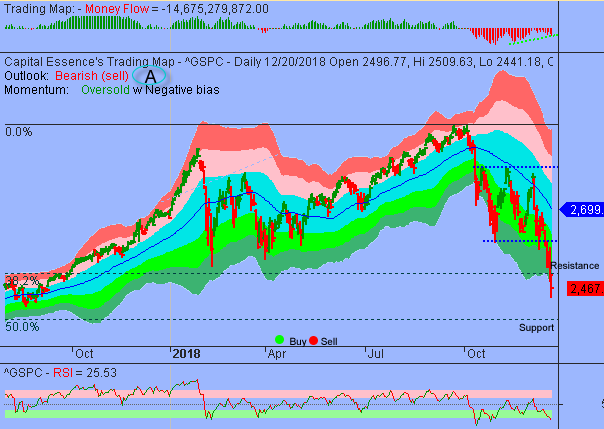 Thursday’s massive selloff pushed the S&P below its normal trading range and into extreme oversold territory (as represents by the dark-green band in the chart).  While extreme oversold condition is normal during long-term downtrend, it suggested that downside momentum might not sustain without at least a short-term breather.  In fact, current trading pattern is very similar to October selloffs.  As shown, after fell below the bottom of its short-term trading range on October 11, the index rebounded nicely after meeting anticipated resistance at the 2800 zone.  With that said, if history is any guidance then traders should expect at least an attempt to rally toward immediate resistance at the 2500-2530 zone.

On the upside, 2600 is the line in the sand.  There is a no reason to turn particularly bullish until this area is eclipsed.

In summary, the S&P is extremely oversold following recent decline.  Like a rubber band, stocks tend to snap back to the mean if they have dropped too far from the “fair” value. With that said, if lower stock prices create some values for investors, then, given everything being equal, the market should be able to find some buyers.  However, give the significant damage that had been done over the past weeks, upside reward could be limited.