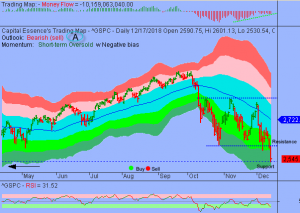 We’ve noted in the previous Market Outlook that: “Friday’s decline led to a serious breach of several supports.  The breakdown breakout would be confirmed on another close below S&P’s 2600, which would support near-term downside follow-through and a test of more important support in the 2530-2515 zone.”  As anticipated, the benchmark index sold off sharply after the morning rebound effort ran into resistance at the 2600 level and traded steadily lower throughout the afternoon and retested its February low of 2532.  For the day, the S&P lost 2.1 percent. The Dow Jones Industrial Average also lost 2.1 percent.  The Nasdaq Composite tumbled 2.3 percent.  The CBOE Volatility Index (VIX), widely considered the best gauge of fear in the market, surged nearly 14 percent to 24.63.

The degree of pessimism is picking up noticeably, evidenced by the widespread de-risking activity.  No sector was safe.  All 11 S&P sectors ended in negative territory.  The financial sector was the best-performing group, although it still finished notably lower.  The Financial Select Sector SPDR ETF (XLF) fell 1 percent on the day and is down 14 percent YTD, underperformed the S&P by a wide margin.  Now the question is whether recent selloff is a beginning of an end or there’re more pains ahead?  Below is an update look at a trade in XLF. 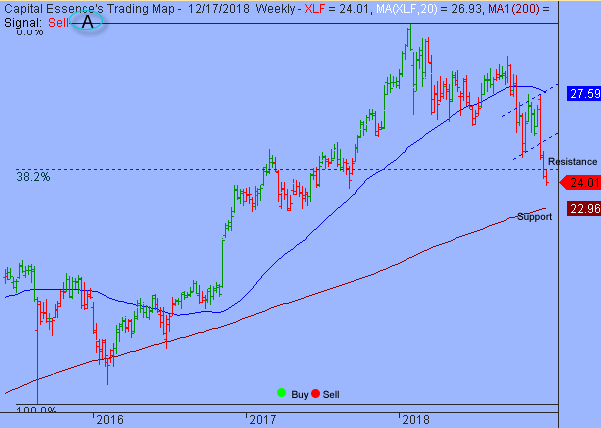 Our “U.S. Market Trading Map” painted XLF bars in red (sell) – see area ‘A’ in the chart.  The first dominant feature on the chart is the rising trend line starting in late 2015.  The second dominant feature of the chart is the downward trend since early 2018.  XLF sold off sharply over the past couple weeks after breaking out from the 2-month bearish flag, which represented the digestion period.  This week’s downside follow-through confirmed last week’s breakout below the 38.2% Fibonacci retracement and opened the flood gate toward the 4-year moving average, around 23.  This level was tested several times over the past years, which offered extraordinary buying opportunities to those whose can stomach the wild rides.

XLF has resistance near 25.50.  Short-term traders could use that level as the logical level to measure risk against. 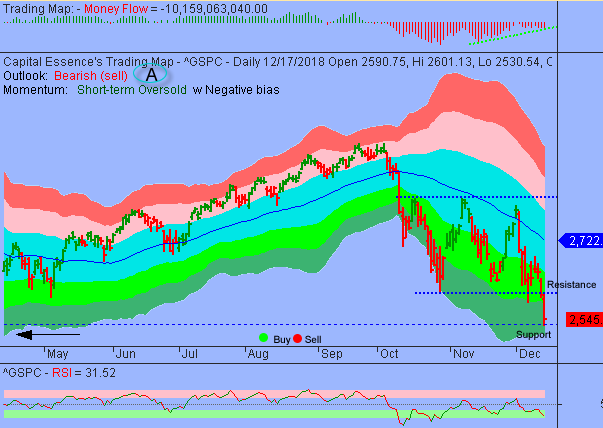 Monday downside follow-through confirmed last Friday’s bearish break below the important sentiment 2600 mark.  Monday’s selloff pushed the index back to the early 2018 lows. Momentum has weakened but oversold conditions could put a short-term floor under the market.  It worth noticing that Money Flow measure did not confirm recent low in the S&P.  As shown, the indicator printed a higher low as S&P undercut the October low.  This bullish divergence suggesting that a meaningful rebound could be in the wings hence we’d be cautious against taking new short positions at this stage.

For now, 2600 is the line in the sand.  A close above it is required to neglect the short-term downward trend pressure.  There is a no reason to turn particularly bullish until this area is eclipsed.

In summary, divergence starts showing up in the Money Flow measure as the S&P tested formidable supports.  Typically, this is a sign that the selloff may be mature and stocks are, therefore, at risk to a short-term rebound.  Near-term, there is a high probability of rapid rallies and retreats between 2530 and 2600.  Short-term traders can play the range but the market is volatile and tight stops are advisable.