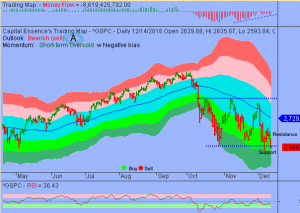 Retailers got hit hard Friday after Costco (COST) reported its fiscal Q1 results, which included revenues that were slightly below consensus. Margin weakness, attributed to higher merchandising costs, also weighed on the stock.  Shares tumbled more than 8 percent.  The SPDR S&P Retail ETF (XRT) fell 1.18 percent on the day and is down 7 percent YTD, underperformed the S&P by a wide margin.  Now the question is whether recent selloff is a beginning of an end or there’re more pains ahead?  Below is an update look at a trade in XRT. 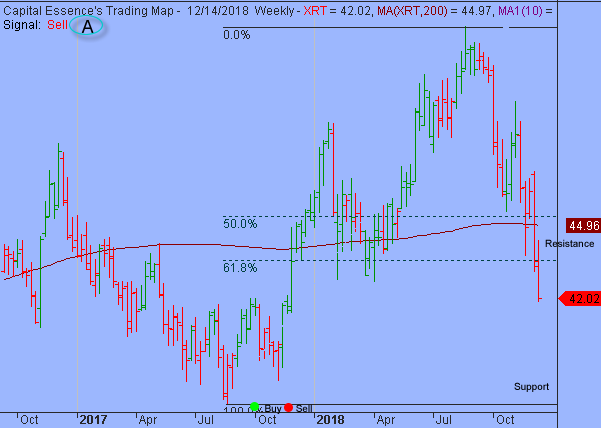 Our “U.S. Market Trading Map” painted XRT bars in red (sell) – see area ‘A’ in the chart.  The first dominant feature on the chart is the rising trend line starting in late 2017.  The second dominant feature of the chart is the downward trend since late August 2018.  Last week’s downside follow-through confirmed the early December’s bearish break below the 4-year moving average and the 61.8% Fibonacci retracement.  This is a negative development, suggested that the entire trend will eventually retrace.  XRT has minor support near 39.  A close below that level on a weekly basis will opened the flood gate toward the 2017 low, just below 38.

XRT has resistance near 45.  Short-term traders could use that level as the logical level to measure risk against. 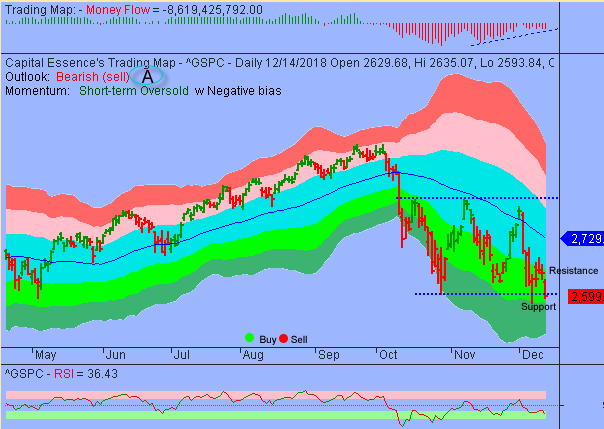 Key technical development in Friday session was a close below the important sentiment 2600 mark.  This is a bearish development because it implied more supply is coming into the market.  And S&P might have to move to a much lower level to attract new buyers as a consequence.  Momentum has weakened but oversold conditions are widespread enough to generate a meaningful rebound.  Right now follow-through is the key.  A close below 2600 on Monday will confirm the bearish break and a retest of support at the 2530-2515 zone, or the early 2018 low and the bottom of its short-term trading range.

For now, 2700 is the line in the sand.  In theory, the longer the index holds below this resistance the stronger it becomes.  A close above it is required to neglect the short-term downward trend pressure.  There is a no reason to turn particularly bullish until this area is eclipsed.

In summary, Friday’s decline led to a serious breach of several supports.  The breakdown breakout would be confirmed on another close below 2600, which would support near-term downside follow-through and a test of more important support in the 2530-2515 zone.