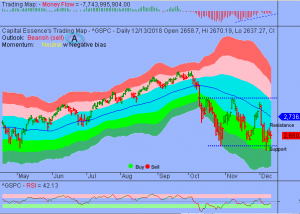 Concerns over slowing economic growth, and its adverse effect on corporate earnings, helped contribute to investors assuming some defensive positioning within the stock market.  The Utilities Select Sector SPDR ETF (XLU) rose 0.87 percent on the day and is up more than 8 percent YTD, outperformed the S&P by a wide margin.  Now the question is whether the rally has more legs?  Below is an update look at a trade in XLU. 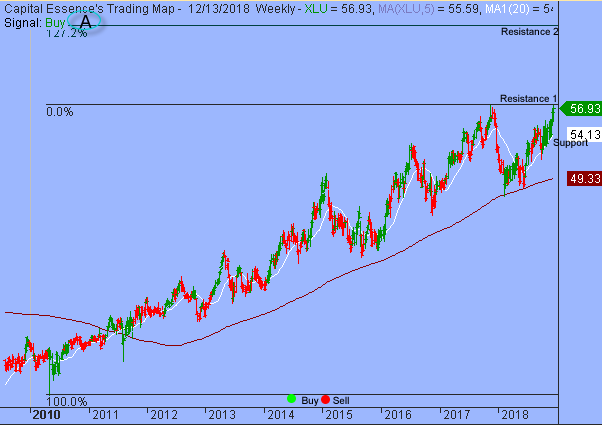 Our “U.S. Market Trading Map” painted XLU bars in green (buy) – see area ‘A’ in the chart.  XLU has been on a tear in recent months after the late 2017 correcting found support at the 4-year moving average.  This week’s rally pushed the ETF up against the all-time high set in December 2017, just above 57.  This level is significant in charting terms.  A close above it on a weekly basis signify a bullish breakout with upside target around 65, or the 127.2% Fibonacci extension.

XLU has support near 54.  Short-term traders could use that level as the logical level to measure risk against. 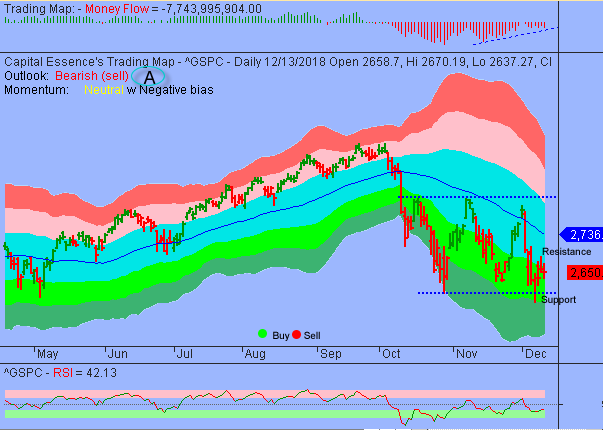 S&P continues basing sideway near resistance at the upper boundary of the green band.  This level was significant when the S&P fell below it in late November.  Momentum has been strengthened but does not appear strong enough to generate widespread breakouts.  Additionally, Money Flow measure is below the zero line, indicating a negative net demand for stocks.  These elements will continue negatively affect trading sentiment in the coming days.

Right now the most important thing to watch is the rallies and retreats behavior near the important sentiment 2700 mark.  In theory, the longer the index holds below this resistance the stronger it becomes.  Momentum has been deteriorated following recent selloff, suggesting the path with least resistance remains lower.  A close above it is required to neglect the short-term downward trend pressure.  There is a no reason to turn particularly bullish until this area is eclipsed.

For now, 2600 is the line in the sand.  So unless there is a serious breach of this important support, we could be range bounce from here into the end of the year.

In summary, trading behavior in the S&P remains constrained by a short-term sideways pattern and shown little evidence of a sustainable change in trend.  Momentum has been strengthened but does not appear strong enough to generate widespread breakouts.  2700 is the line in the sand.  There is a no reason to turn particularly bullish until this area is eclipsed.