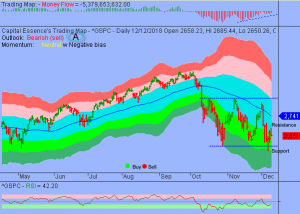 We’ve noted in the previous Market Outlook that: “while several indicators remain supportive of further pullback, return of oversold conditions on an intraday basis might help putting put a short-term floor under the market.  However, the bulls must hurdle and sustain above S&P’s 2700 or market will work off oversold conditions and fall under its own weight.  With that said, the longer the index stays below 2700, the more vulnerable it is to lower prices.”  As anticipated, optimism that trade relations between the U.S. and China were progressing sent stocks higher in early Wednesday that saw the S&P gained as much as 1.9 percent before sellers stepped in and pushed the market off the intraday high.  For the day, the bench mark gauge climbed 0.6 percent to close at 2,651.07.  The Dow Jones Industrial Average rose 0.6 percent to close at 24,527.27.  The Nasdaq Composite jumped 1 percent to 7,098.31.  The CBOE Volatility Index (VIX), widely considered the best gauge of fear in the market, fell 1.4 percent to 21.46.

Strikingly, the Dow Jones Transportation Average, which is a key driver of economic sentiment, underperformed as UPS (UPS) and FedEx (FDX) dragged on the average.  The iShares Transportation Average ETF (IYT) closed flat on the day but is down more than 7 percent YTD, underperformed the S&P by a wide margin.  Now the question is whether recent selloff is a pause that refreshes or it’s a beginning of something worse?  Below is an update look at a trade in IYT. 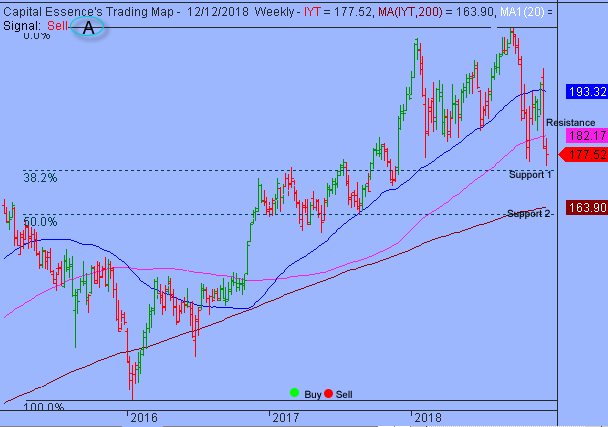 Our “U.S. Market Trading Map” painted IYT bars in red (sell) – see area ‘A’ in the chart. The first dominant feature on the chart is the rising trend line starting in 2016.  The second dominant feature of the chart is the downward trend since late September 2018.  This week’s downside follow-through confirmed last week’s bearish break below the 2-year moving average. That level that was significant when the ETF broke above it in 2016.  Right now the most important thing to watch is the retreat and rebound behavior near 173, or the 38.2% Fibonacci retracement.  A close below that level has measured to 163, or the 4-year moving average and the 50% Fibonacci retracement.

IYT has resistance near 182.  Short-term traders could use that level as the logical level to measure risk against. 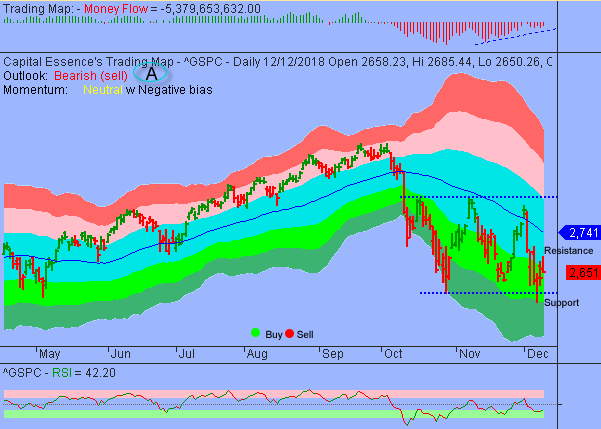 Once again, S&P sold off sharply after the early rally attempt ran out of steam just below the important sentiment 2700 mark.  In theory, the longer the index holds below this resistance the stronger it becomes.  Momentum has been deteriorated following recent selloff, suggesting the path with least resistance remains lower.

For now, 2600 is the line in the sand.  So unless there is a serious breach of this important support, we could be range bounce from here into the end of the year. As for resistance, if 2700 is taken out on a closing basis, then the door is opened for a retest of the October and November recovery highs, near 2815 but it’s not expected this week.

In summary, S&P’s rally attempt failed near formidable resistance, indicating the path with least resistance remains lower.  If the index fails to climb above 2700 this week, then the next stop will be 2600 with the possibility of a brief breakdown below that level.