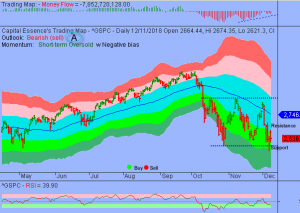 We’ve noted in the previous Market Outlook that: “positive divergence starts showing up in the Money Flow measure as the S&P tested key supports.  Typically, this is a sign that the downswing may be mature and stocks are, therefore, at risk to a significant upside.  Near-term, there is a high probability of rapid rallies and retreats between 2600 and 2815. Short-term traders can play the range but the market is volatile and tight stops are advisable.”  As anticipated, the benchmark index traded as high as 1.4 percent shortly after the start of trading, but surrendered the entirety of that gain and closed near the flat line at 2,636.78.  The Dow Jones Industrial Average fell 0.2 percent to 24,370.24 while the Nasdaq Composite rose 0.16 percent to 7,031.83.  The CBOE Volatility Index (VIX), widely considered the best gauge of fear in the market, fell nearly 4 percent to 21.76.

Carmakers caught a bid Tuesday after the Wall Street Journal reported that that China verbally agreed to reduce U.S. import auto tariffs to 15% from 40%, which followed a Bloomberg article from the morning that said China had submitted a proposal to reduce the tariffs.  The First Trust NASDAQ Global Auto ETF (CARZ) rose 0.43 percent on the day but is down more than 23 percent YTD, underperformed the S&P by a wide margin.  Now the question is whether recent rally is a beginning of a new upswing or it’s merely a dead cat bounce?  Below is an update look at a trade in CARZ. 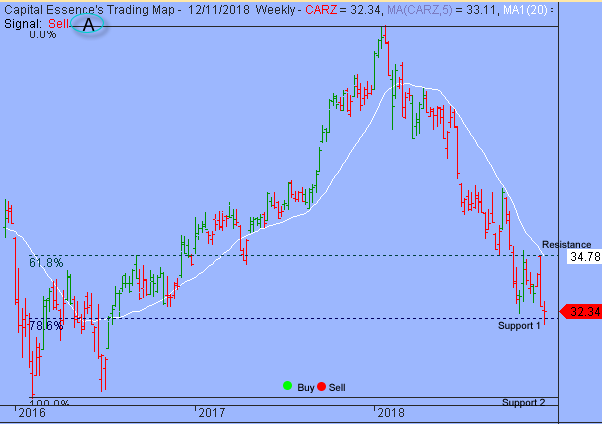 Our “U.S. Market Trading Map” painted CARZ bars in red (sell) – see area ‘A’ in the chart. The first dominant feature on the chart is the rising trend line starting in 2016.  The second dominant feature of the chart is the downward trend since early 2018.  Over the past few weeks, CARZ has been basing sideways using the 78.6% Fibonacci retracement as support after falling the important 61.8% Fibonacci retracement early October.  This is a bearish development, suggesting that the entire trend will eventually retrace.  Right now the most important thing to watch is the retreat and rebound behavior near 32.  A close below that level has measured to 28.50, or the 2016 low.

CARZ has resistance just below 35.  Short-term traders could use that level as the logical level to measure risk against. 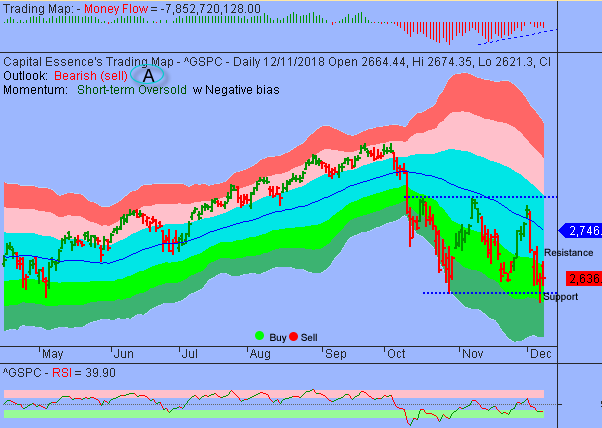 As expected, the S&P rebounded nicely in early Tuesday session following Monday’s massive intraday reversal.  Nevertheless, the late day selloff is a clear evidence of lack of commitment among the bulls.  Market is short-term oversold following recent selloff but momentum has been deteriorated.  These are negative developments, suggesting the path with least resistance remains lower.

In summary, while several indicators remain supportive of further pullback, return of oversold conditions on an intraday basis might help putting put a short-term floor under the market.  However, the bulls must hurdle and sustain above S&P’s 2700 or market will work off oversold conditions and fall under its own weight.  With that said, the longer the index stays below 2700, the more vulnerable it is to lower prices.