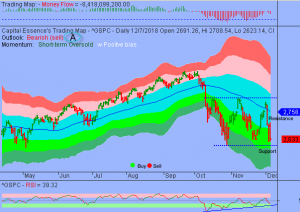 Stocks closed lower Friday as global growth concerns were exacerbated by negative developments regarding U.S-China trade negotiations and the continued flattening of the U.S. Treasury yield curve.  The Dow Jones Industrial Average lost 2.2 percent to 24,388.95.  The S&P pulled back 2.3 percent to 2,633.08. The Nasdaq Composite dropped 3.05 percent to close at 6,969.25.  The CBOE Volatility Index (VIX), widely considered the best gauge of fear in the market, surged more than 9 percent to 23.23.

The rate-sensitive financial sector was undermined by the flattening yield curve, which raised concerns about a compression in net interest margins. The Financial Select Sector SPDR ETF (XLF) fell 1.91 percent on the day and is down 10 percent YTD, underperformed the S&P by a wide margin.  Now the question is whether recent selloff is a beginning of an end or there’re more pains ahead?  Below is an update look at a trade in XLF. 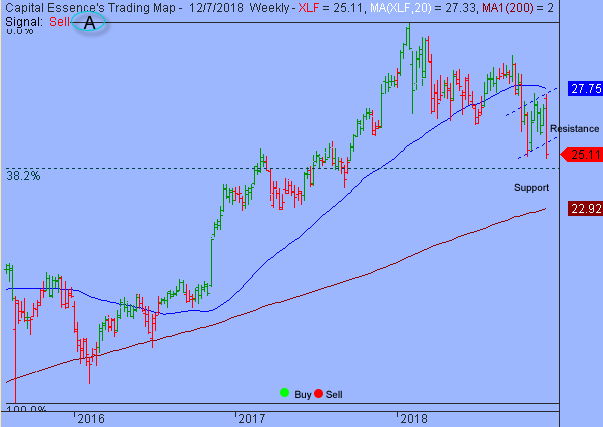 Our “U.S. Market Trading Map” painted XLF bars in red (sell) – see area ‘A’ in the chart. The first dominant feature on the chart is the rising trend line starting in 2015.  The second dominant feature of the chart is the downward trend since early 2018, which represents the digestion period.  Over the past few weeks, XLF has been trending higher in a short-term corrective mode after the September down leg found support near the 38.2% Fibonacci retracement.  The corrective leg tested and failed at the 1-year moving average.  Last week’s massive selloff pushed the ETF below the November rising trend line support, suggested that the 6-week bearish flag had resolved itself into a new downswing.  A downside follow-through this week will confirm this and a test of the more important support near the 23 zone, based on the 4-year moving average, should be expected.

XLF has resistance just below 28.  Short-term traders could use that level as the logical level to measure risk against. 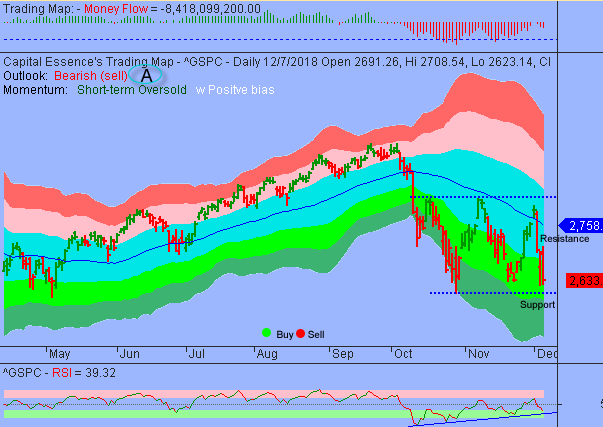 Once again, S&P moved down to test support at the October-November lows after Thursday’s rally attempt failed at the important sentiment 2700 zone.  Market internal has been weakened but downside momentum does not appear strong enough to generate a widespread breakdown.  Additionally, despite recent massive selloff, Money Flow measure is at the highest level going back to early October, suggesting that selling pressure had eased.

In summary, S&P shifted to consolidation mode.  The index could signal an extended downward trajectory, depending on how it closes over the next few days. For now, 2600 is the line in the sand. We’d turn particular bearish if the index closes twice below that level.  With that said, if that support gives way, the next leg is likely lower, and we’re looking at 2530.