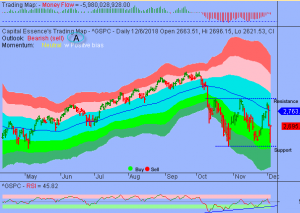 We’ve noted in the previous Market Outlook that: “S&P broke key supports Tuesday, signify a bearish trend reversal.  While the near-term technical backdrops favors further short-term weakness, it will be important to monitor the retreat and rebound behaviors to determine whether breakouts are decisive.  In a longer term, there is a high probability of a period of consolidation activity between S&P’s 2600 and 2800 that might last several weeks if not months.  This consolidation band provides a rally and retreat trading environment for traders.  However, market is volatile and tight stops are advisable.”  As anticipated, stocks sold off sharply in early Thursday session that saw the S&P down as much as 2.9 percent before buyers stepped in and pushed the index off the intraday low.  For the day, the bench mark gauge lost 0.15 percent lower at 2,695.95. The Dow Jones Industrial Average closed 0.3 percent lower at 24,947.67.  The Nasdaq Composite rose 0.4 percent to close at 7,188.26.  The CBOE Volatility Index (VIX), widely considered the best gauge of fear in the market, rose more than 2 percent to 21.19.

Strong finishes from many of the FAANG stocks helped lift the technology group, which rallied sharply into the close. Facebook (FB), Netflix (NFLX), Alphabet (GOOG), and Amazon (AMZN) all rose between 1.2 percent and 2.7 percent.  The Technology Select Sector SPDR ETF (XLK) rose 0.22 percent on the day but is up nearly 5 percent YTD, outperformed the S&P by a wide margin.  Now the question is whether recent pullback is a pause that refreshes or it’s a beginning of something worse?  Below is an update look at a trade in XLK. 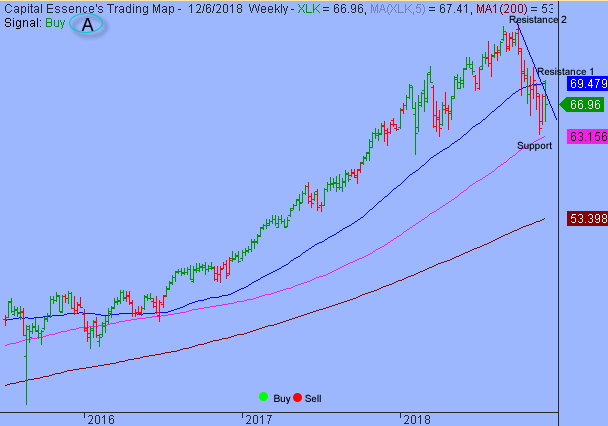 Our “U.S. Market Trading Map” painted XLK bars in green (buy) – see area ‘A’ in the chart. The first dominant feature on the chart is the rising trend line starting in 2015.  The second dominant feature of the chart is the downward trend since October 2018, which represents the digestion period.  The correction tested support at the 2-year moving average, the level that offered support since the ETF reached an interim low in 2016.  This week’s rally pushed XLK above the October falling trend line, signify a bullish reversal.   A close above 69.50 on a weekly basis will confirm the signal and a retest of the October high, just above 76, should follow shortly.

XLK has support near 63.  Short-term traders could use that level as the logical level to measure risk against. 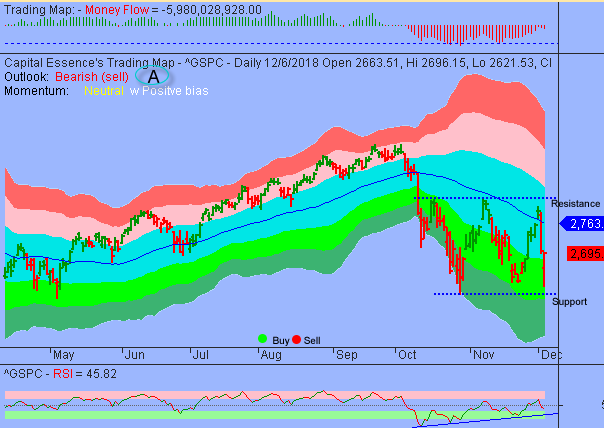 As expected, S&P moved down to test support at the October-November lows following Tuesday’s bearish reversal signal. The late-day rally suggested that the support would hold, at least for the time being.  Market internal has been weakened but downside momentum does not appear strong enough to generate a widespread breakdown.  Additionally, despite recent massive selloff, Money Flow measure is at the highest level going back to early October, suggesting that selling pressure had eased.

In summary, recent trading actions leaving the S&P in what looks to us like an orderly low level consolidation of the October massive selloff.  The index is holding firmly above 2600, a level it has not breached since market reached an interim low in October. So unless there is a serious breach of this important support, we could be range bounce from here into the end of the year.