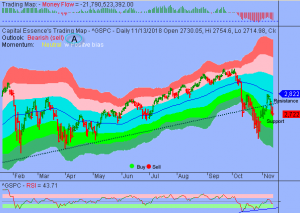 We’ve noted in the previous Market Outlook that: “S&P broke key supports Monday, signify a bearish trend reversal.  While the near-term technical backdrops favors further short-term weakness, it will be important to monitor the retreat and rebound behaviors to determine whether breakouts are decisive.”  As anticipated, stocks closed lower in volatile trading on Tuesday, failing to regain their footing after suffering steep losses in the previous session.  The S&P climbed as high as 1 percent in morning session amid U.S.-China trade optimism, but energy stocks eventually led the broader market lower as oil prices tanked.  For the day, the bench mark gauge dipped 0.2 percent to 2,722.18.  The Dow Jones Industrial Average lost 0.4 percent to 25,286.49.  The Nasdaq Composite closed just along the flatline at 7,200.87.  The CBOE Volatility Index (VIX), widely considered the best gauge of fear in the market, fell more than 2 percent to 20.02

Energy was the worst-performing sector as crude prices fell to their lowest levels in a year, tumbled more than 7 percent Tuesday to extend their losing streak to 12 straight sessions.  Crude’s sharp decline pushed energy stocks down by more than 2 percent.  The Energy Select Sector SPDR ETF (XLE) fell 2.30 percent on the day, and is down more than 9 percent YTD, underperformed the S&P by a wide margin.  Now the question is whether recent selloff is a beginning of an end or there’re more pains ahead?  Below is an update look at a trade in XLE. 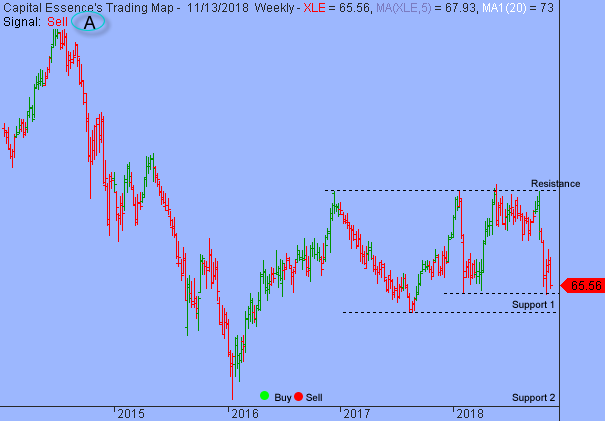 Our “U.S. Market Trading Map” painted XLE bars in red (sell) – see area ‘A’ in the chart. The first dominant feature on the chart is the falling trend starting in mid-2014.  The second dominant feature of the chart is the range bound trading pattern between 78 and 62 since early 2017. Over the past few weeks, XLE has been basing sideways near the early 2018 low, just above the lower boundary of its 2-year trading range.  The fact that the November rally attempt failed to take the ETF back to the 78 zone, or the upper boundary of its short-term trading range, signify a major trend shift is underway.  Nevertheless, support is strong between 64-62.  There is no reason to turn particular bearish until this zone is taking out.  A close below 62 has measured move to 50, or the 2016 low.

XLE has resistance near 71.  Short-term traders could use that level as the logical level to measure risk against. 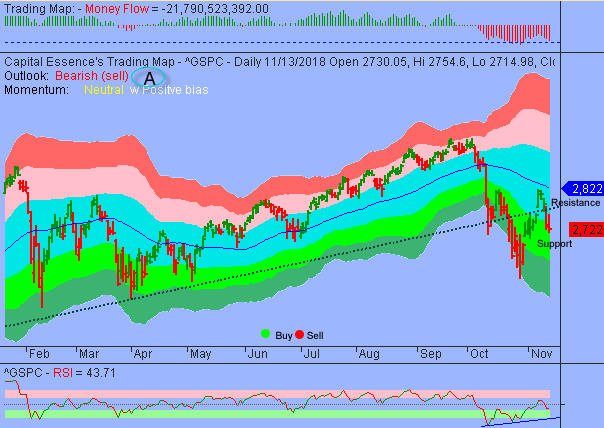 Once again, S&P sold off sharply after the early rally attempt ran out of steam near the 2016 rising trend line.  That level was significant when the index fell below it in October and again on Monday.  Technically speaking, the longer the index holds below this resistance the stronger it becomes.  Adding to concerns is Money Flow measure, which hover near multi-year lows since market broke down in October, indicating a negative net demand for stocks.  Momentum has been weakened but does not appear strong enough to generate a widespread breakdown.  Right now, the most important thing to watch is the retreat and rebound behavior near 2730.  A close below that level on a weekly basis will bring the October low into view.

In summary, S&P rally attempt failed at formidable resistance.  If the index fails to hold above 2730 this week, then the next stop will be 2600 with the possibility of a brief breakdown below that level.