We’ve noted in the previous Market Outlook that: “there is currently a test of support at last week’s breakout point.  Momentum and Money Flow measure are not favorable over the near to intermediate term, suggesting that this is not a time to accumulate stocks aggressively.”  As anticipated, stocks tumbled out of gate Monday with the S&P dropped 2 percent to 2,726.22.  The Dow Jones Industrial Average lost 2.3 percent to 25,387.18.  The tech-heavy Nasdaq Composite dropped 2.8 percent to 7,200.87.  The CBOE Volatility Index (VIX), widely considered the best gauge of fear in the market, surged nearly 18 percent to 20.45.

One of the noteworthy developments in recent days has been the move in tech stocks. The group was under selling pressure Monday after Apple supplier Lumentum (LITE) cutting its guidance due to a large, unnamed customer requesting to reduce shipments of laser diodes for 3D sensing. It is widely assumed that Apple is the customer in question, as it accounted for 30% of LITE’s fiscal 2018 net revenue and uses laser diodes for its iPhone Face ID technology. This marks the second Apple supplier in as many weeks to have issued guidance warnings.  The Technology Select Sector SPDR ETF (XLK) tumbled 3.52 percent on the day but is up 5.4 percent YTD, outperformed the S&P by a wide margin.  Now the question is whether recent pullback is a pause that refreshes or it’s a beginning of something worse?  Below is an update look at a trade in XLK. 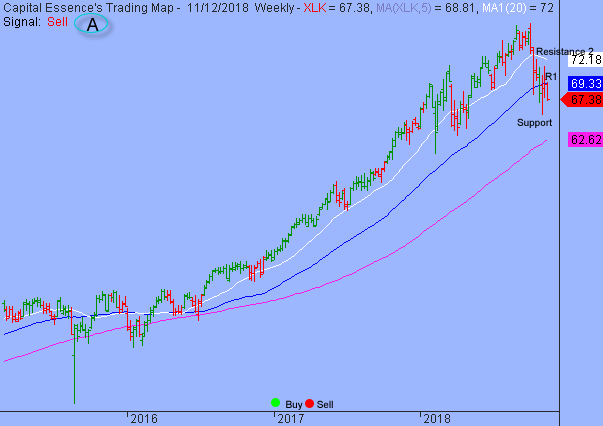 Our “U.S. Market Trading Map” painted XLK bars in red (sell) – see area ‘A’ in the chart. The first dominant feature on the chart is the rising line starting in 2015.  The second dominant feature of the chart is the downward trend since late September 2018, which represented the digestion period. Over the past few weeks, XLK has been basing sideways near the 1-year moving average, a key technical level, as it works off oversold conditions.  This is a bearish development, suggesting that the ETF might need to go to a much lower level to attract new buyers.  The October low, near 65.50, represents key support.  A close below that level has measured move to 62.70, or the 2-year moving average.

XLK has resistance just above 72.  There is no reason to turn particular bullish until this zone is eclipsed. 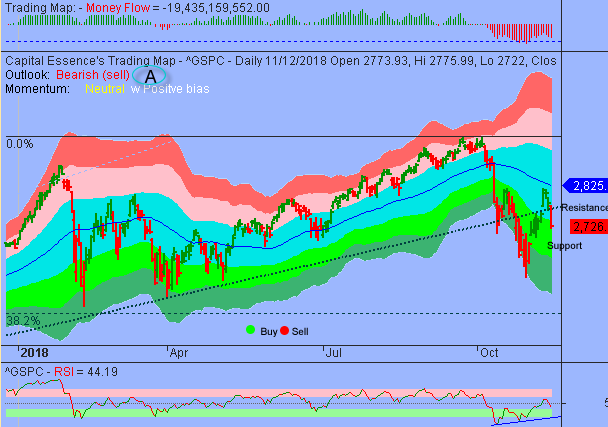 Key technical development in Monday session was a close below the 2016 rising trend line.  This level was significant when the S&P climbed above it last week.  Momentum has been weakened but does not appear strong enough to generate a widespread breakdown.  Money Flow measure flashes bearish signal as it trended lower from below the zero, indicating a negative net demand for stocks.  These elements will continue negatively affect trading sentiment in the coming days. Right now follow-through is the key.  We’d turn particular bearish if S&P fails to stage a relief bounce tomorrow.

In summary, S&P broke key supports Monday, signify a bearish trend reversal.  While the near-term technical backdrops favors further short-term weakness, it will be important to monitor the retreat and rebound behaviors to determine whether breakouts are decisive.