Transport stocks fell on Thursday, as supply concerns due to U.S. sanctions that could cause a large drop in crude exports from Iran helped fuel a rise in oil prices.  The United States this week demanded all countries halt imports of Iranian oil from November, a hardline position the Trump administration hopes will cut off funding to Tehran.  U.S. West Texas Intermediate (WTI) crude futures settled at $73.45 a barrel, up 0.95 percent. It reached $74.03 earlier in the session, highest since Nov. 26, 2014.   The selloff is weighing on the iShares Transportation Average ETF (IYT), which is down 0.26 percent on Thursday.  The ETF fell 3.2 percent YTD.  Now the question is whether the recent selloff is a pause that refreshes or it’s a beginning of something worse?  Below is an update look at a trade in IYT. 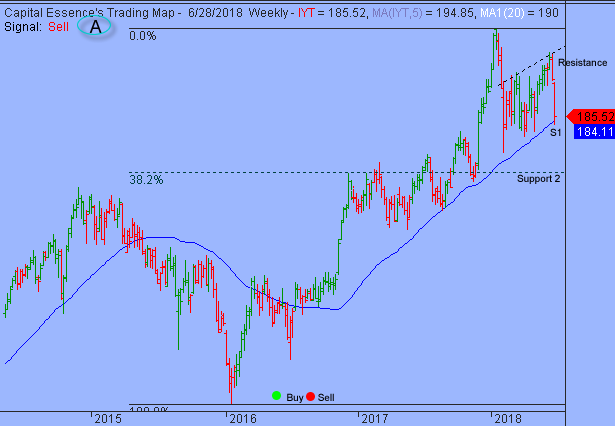 Our “U.S. Market Trading Map” painted IYT bars in red (sell) – see area ‘A’ in the chart. Alter a strong run of outperformance since early 2016, IYT peaked in early 2018 and rolled over.  There is a distinct possibility that a bearish flag formation is currently setting up in the weekly chart of IYT, which represents the digestion period in the aftermath of the late January 2018 massive selloff.  This week’s massive selloff pushed the ETF down…Click here to read more.