One of the noteworthy developments in recent days has been the move in car makers.  The group has been under some selling pressure in recent days after Donald Trump withdrew from the Obama-era 2015 nuclear deal reached between Iran and six major powers.  The move sent gas prices higher, hurting auto sales and consumer spending.  The First Trust NASDAQ Global Auto ETF (CARZ) fell 1.4 percent Wednesday to 40.83, down 3.3 percent YTD, underperformed the S&P by a wide margin.  Now the question is whether recent pullback is a pause that refreshes or it’s a beginning of something worse?  Below is an update look at a trade in CARZ. 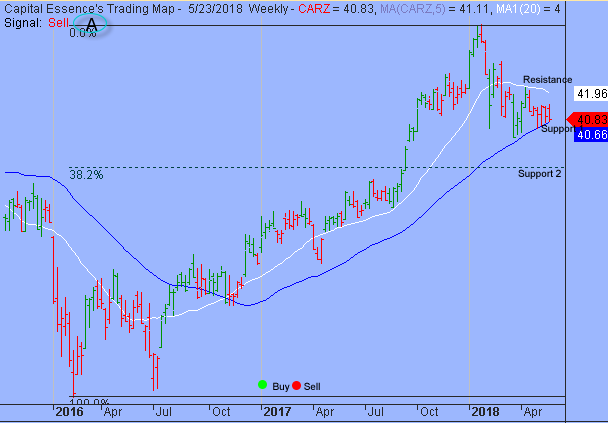 Our “U.S. Market Trading Map” painted CARZ bars in red (sell) – see area ‘A’ in the chart.  The first dominant feature on the chart is the rising trend line starting in early 2016.  The second dominant feature of the chart is the downward trend since early 2018.  The late March oversold relief bounce found resistance at the 20-week moving average.  Trading actions over the past few weeks represented an orderly low-level consolidation period…Click here to read more.